Lecture about the San Damiano City Monastery in ‘s-Hertogenbosch

I can give you a glimpse into what is sometimes called the interfranciscan project: the San Damiano City Monastery in ‘s-Hertogenbosch. 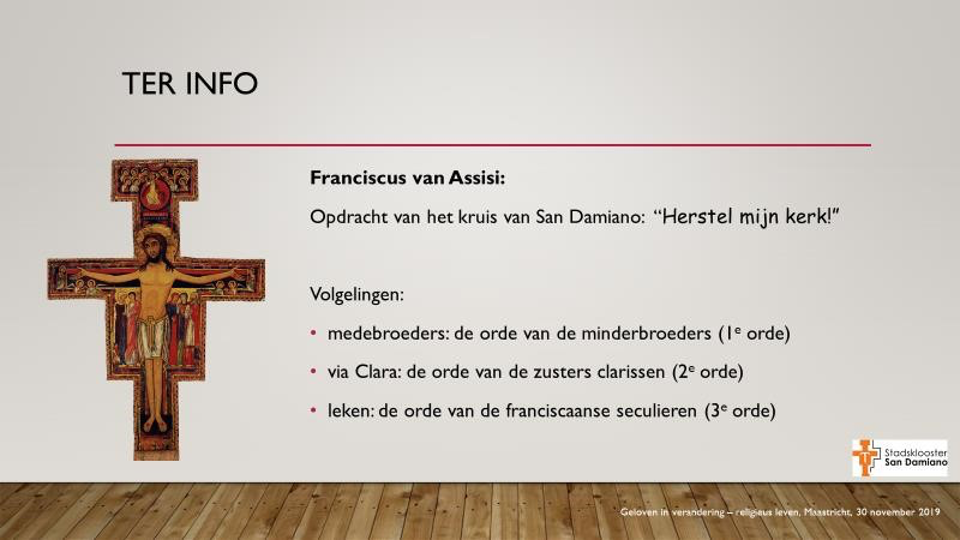 Francis of Assisi lived around 1200. Looking for the purpose in his life, he once prayed in the dilapidated church of San Damiano “Lord what do you want me to do?” The cross answered him with the words, “Restore my church!”

Francis initially took this literally, but only later understood that the Church was meant with a capital letter. 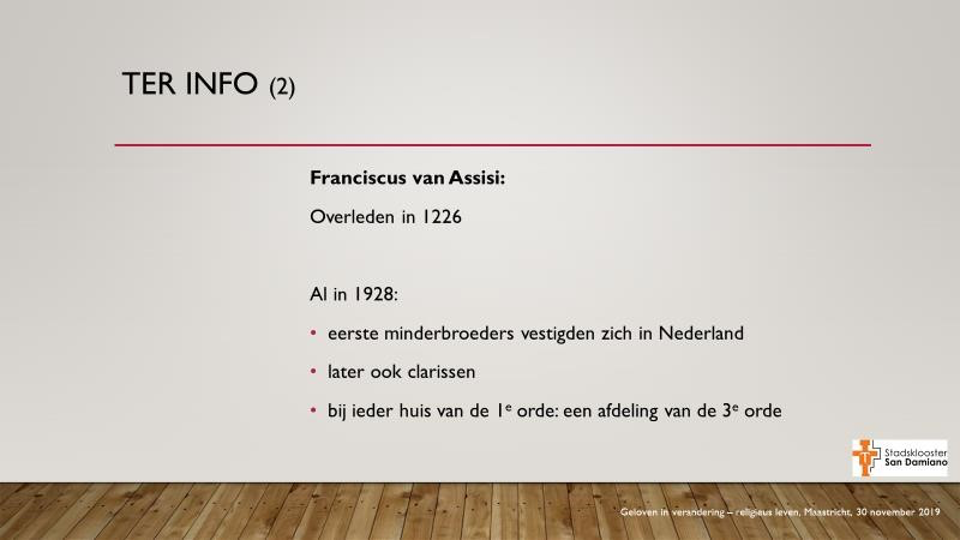 Already in 1228, two years after the death of Francis, the first Friars Minor settled in the Netherlands, namely in ‘s-Hertogenbosch. Later the Poor Clares sisters were also joined them. Many street names still refer to the Friars Minor and the Sisters. After the liberation of the city from the Spaniards in 1629, the open profession of the Catholic faith was prohibited in ‘s-Hertogenbosch, as in the rest of the reconquered Netherlands. But with a short interruption of just over 100 years, the Friars Minor have always remained in the city, albeit in so-called secret churches. 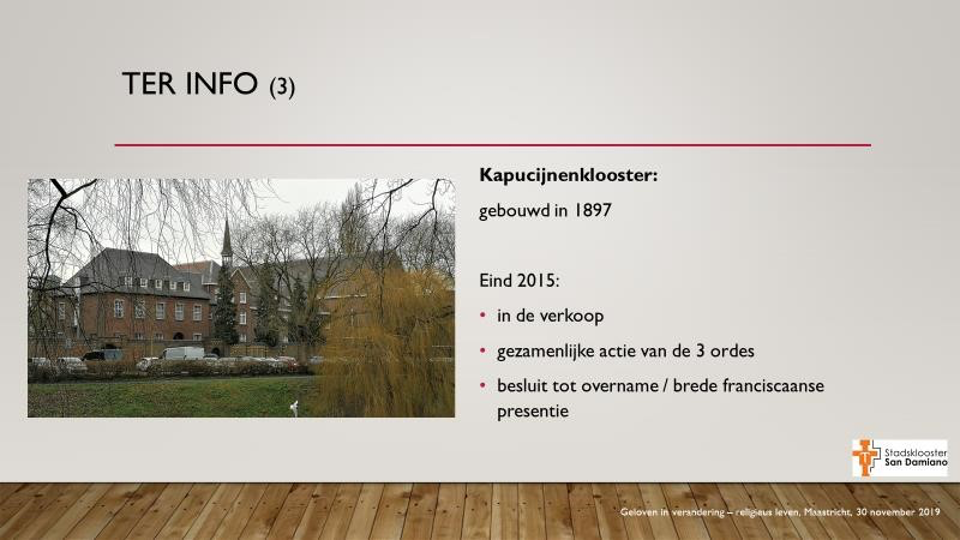 Late 19 e century Catholicism was allowed again in the Netherlands and the Capuchin Friars returned to the city. They built this monastery in 1897. At the end of 2015 we heard that they were going to close the monastery, because it was getting too big and most of the brothers needed a place in their monastery for the elderly in Tilburg. An initiative of the Franciscan Friars, Clare Sisters and the Order of Franciscan Seculars was then able to ensure that the Franciscans could take over, the aim being, among other things, to use it with all three branches of the Franciscan family. 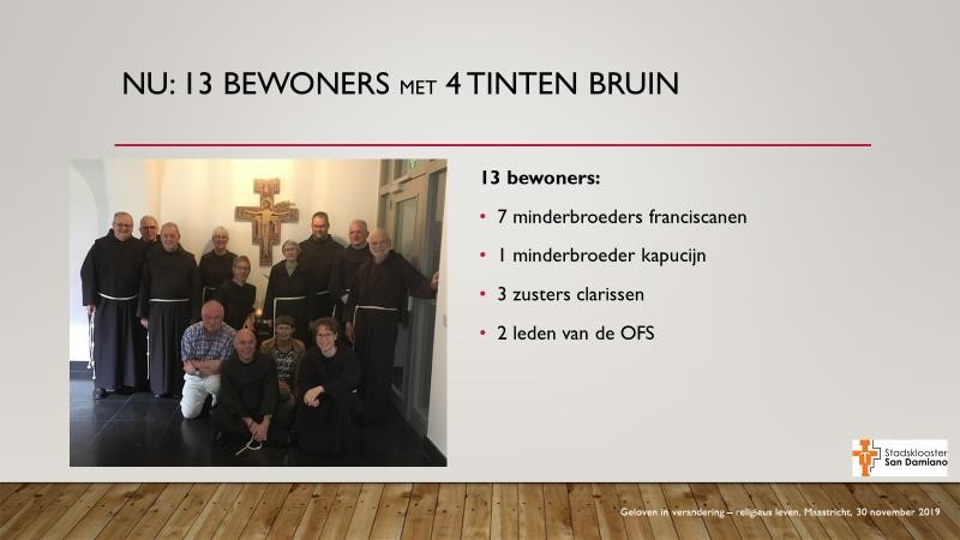 Now we live there with 13 people; 7 Franciscans, 1 Capuchin, 3 Clarisse Sisters and 2 members of the OFS, so really 4 different shades of brown 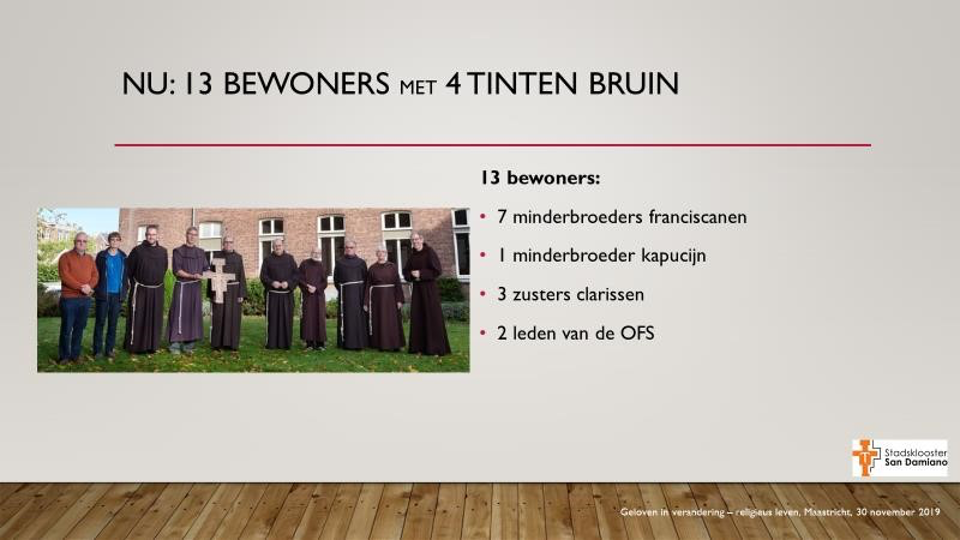 The variation in shades of brown can be seen even better on this shot, which was taken in the garden. 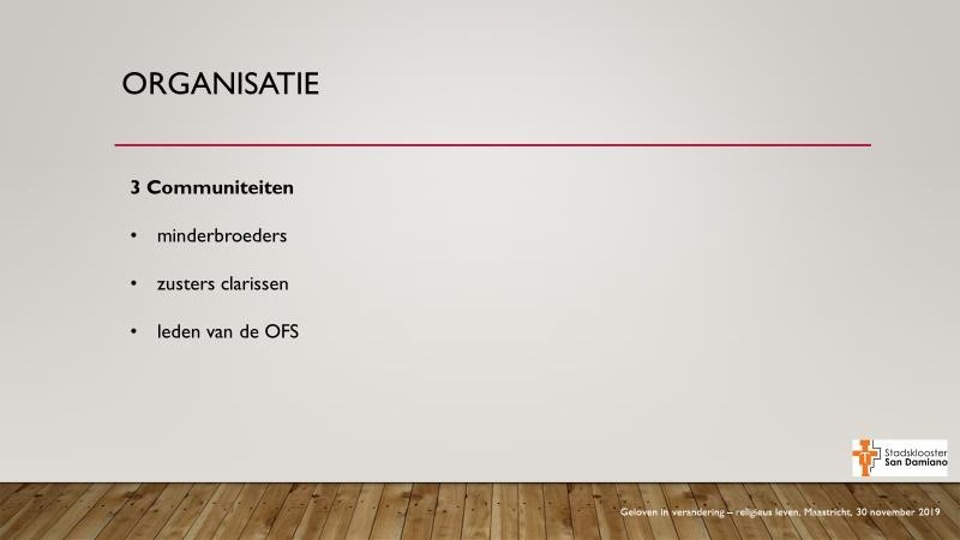 A few words about how we organized it: 3 communities live under this one roof: the Friars Minor, the Poor Clares and the Order of Franciscan Seculars. We think this is an important starting point. 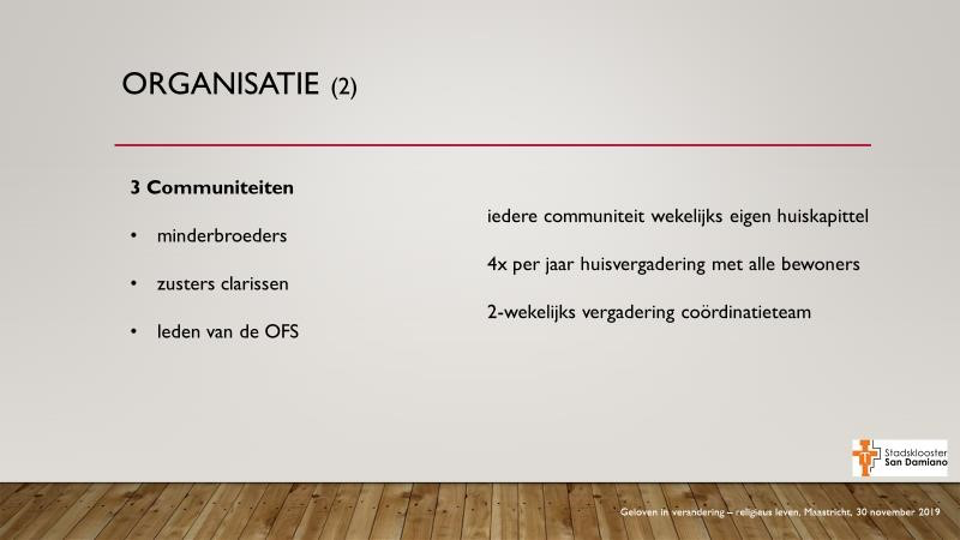 Each community has its own house chapter, usually weekly. In addition, there is a house meeting with all residents 4 times a year, where we talk about policy decisions in the longer term. These meetings take place under the chairmanship of an external chairman, a friar from another community. 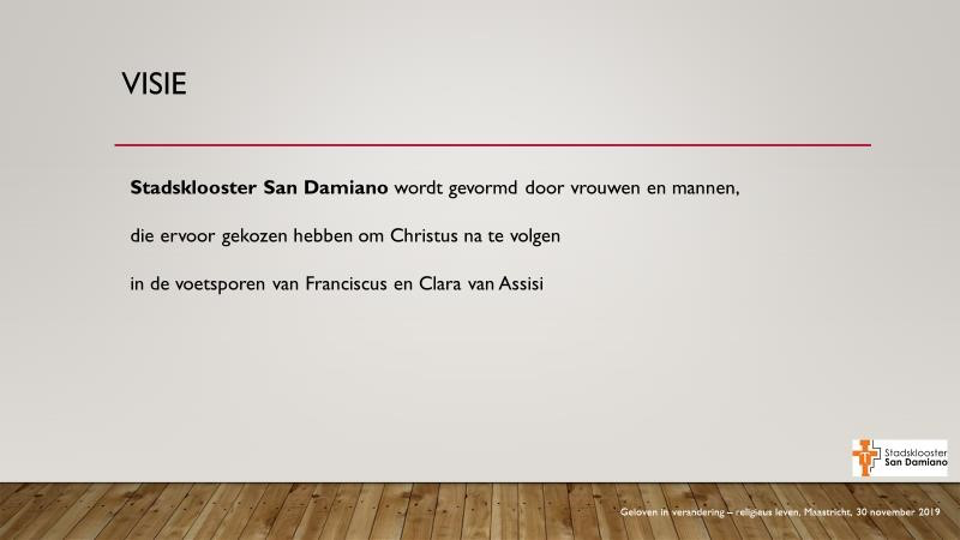 More important than the organizational structure is of course the vision from which we live in the Stadsklooster. This vision essentially boils down to the following: “The San Damiano City Monastery is formed by women and men, who have chosen to follow Christ in the footsteps of Francis and Clare of Assisi. 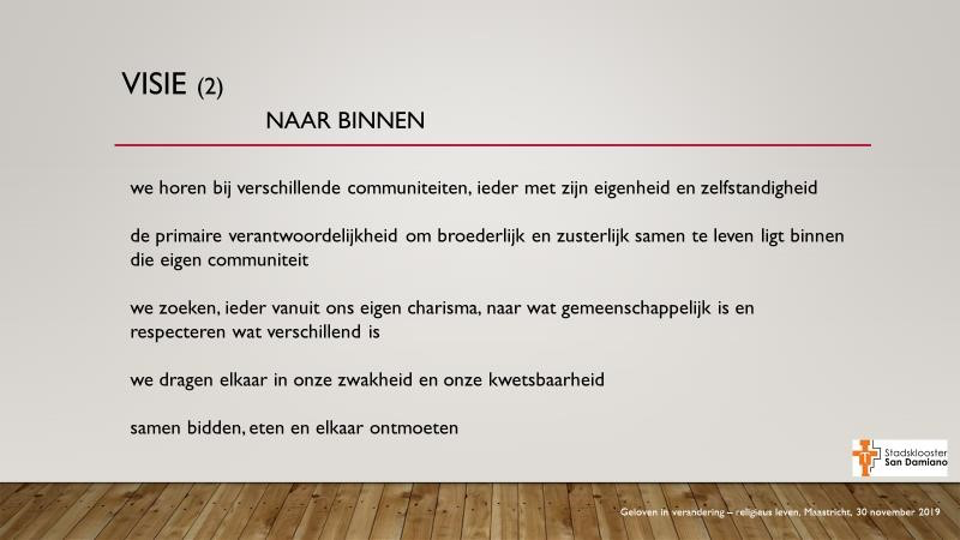 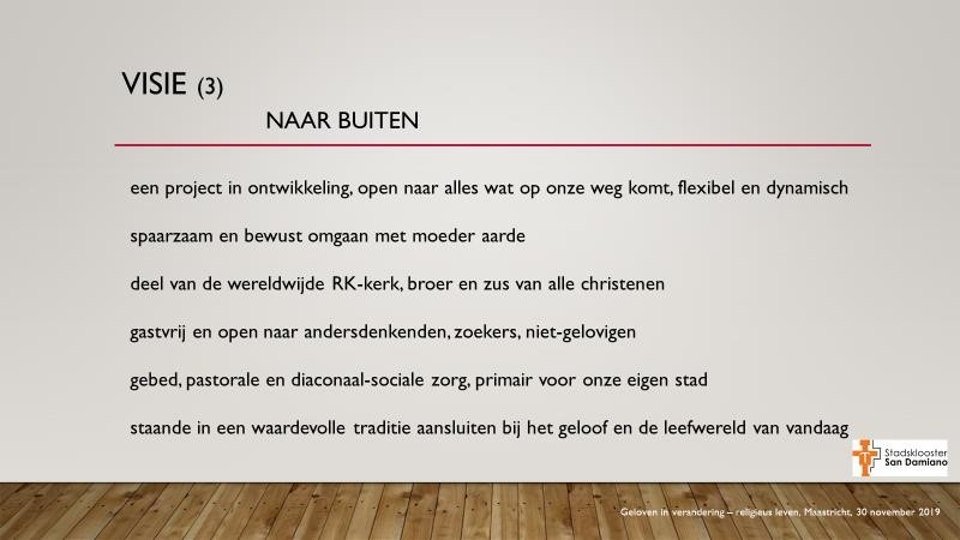 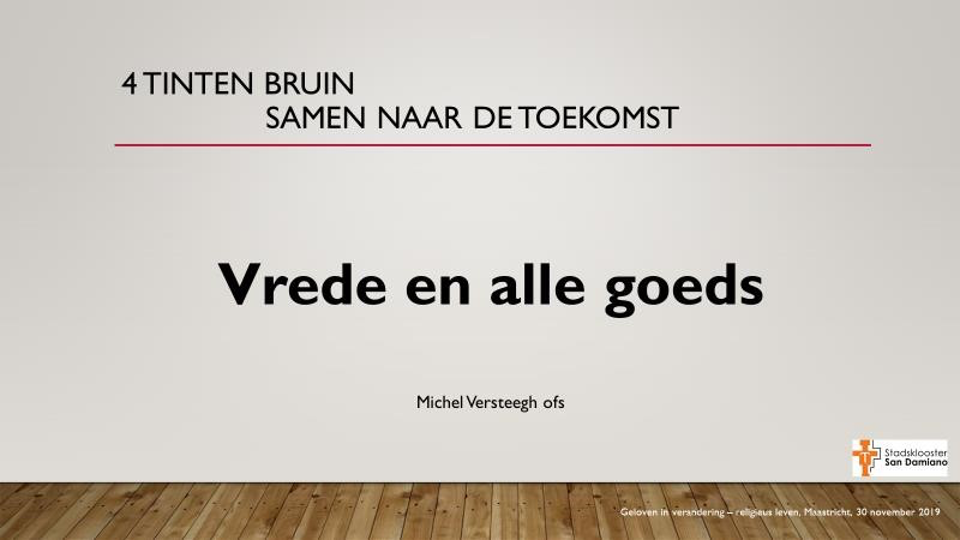 I hope you have felt a bit like a guest in our San Damiano City Monastery. It remains for me to thank you for your attention and to wish you with the words of Francis: Peace and all good.

Coordinator in the Franciscan Convent of San Damiano in Den Bosch.

In the ecumenical project Networking Intentional Christian Communities (NICC), developments around future-oriented religious community life in the Netherlands, Flanders and Germany are investigated.